September swept by with never a moment's peace to sit quiet and tell you the news!  The first week we were busy making peach jam from the bounty presented from our neighbor's orchard.  All the while, we did our best to stay ahead of the tide of tomatoes that were now presenting themselves.  Bushels and buckets of these red beauties were harvested as quickly as possible but I would be the first to admit that it was had to stay ahead. 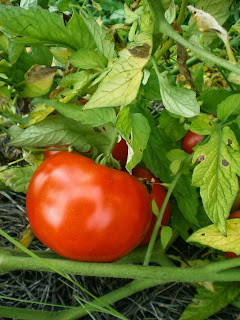 The Beefsteak tomatoes all ripened within the first two weeks of September.  It was hard to resist the temptation to pick them early.  By leaving these to ripen on the plant, the beefsteak develops an indescribable rich full flavor that compliments nearly any food it's paired with.  It was a perfect summer for growing tomatoes: hot enough to encourage growth, wet enough to make luscious fruit,  steady weather without too many extremes which cause the fruit to split or get yucky in other ways. 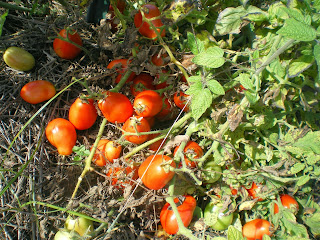 After one of the more severe late summer storms, we found that many of the plum tomatoes had literally been blown from their attachments.  Plum tomatoes were scattered clear to the garden fence line!  Fortunately this is a type of tomato that will continue to ripen and keep its flavor after being removed from the plant. 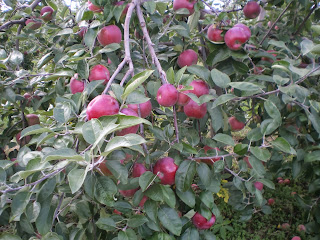 Apricots, peaches, then plums all ripened and were ready by the early weeks in September.  The first apples, mostly the yellow varieties, began making their appearances at the market by the second week.  The area orchards are now busy picking the crops that will appear in supermarkets within the next week or so.  What doesn't end up in a pie today, is being prepared and froze for later this winter when a cortland tart or turnover is just the treat to warm up with.