The weather has been warm and windy, which on the one hand can be quite nice but even the little goat girls don't like to get their hair mussed.  Christmas is a quiet affair at My Happy Acres.  Everyone gets special treats.

Bits of apple, scratch, and a wee bit of salad with some fresh cranberries makes for happy chickies.

The goat girls were all gleefully dancing about their Christmas tree.  Of course for them the tree is less decoration and more supplementation to their already rich and varied diet. 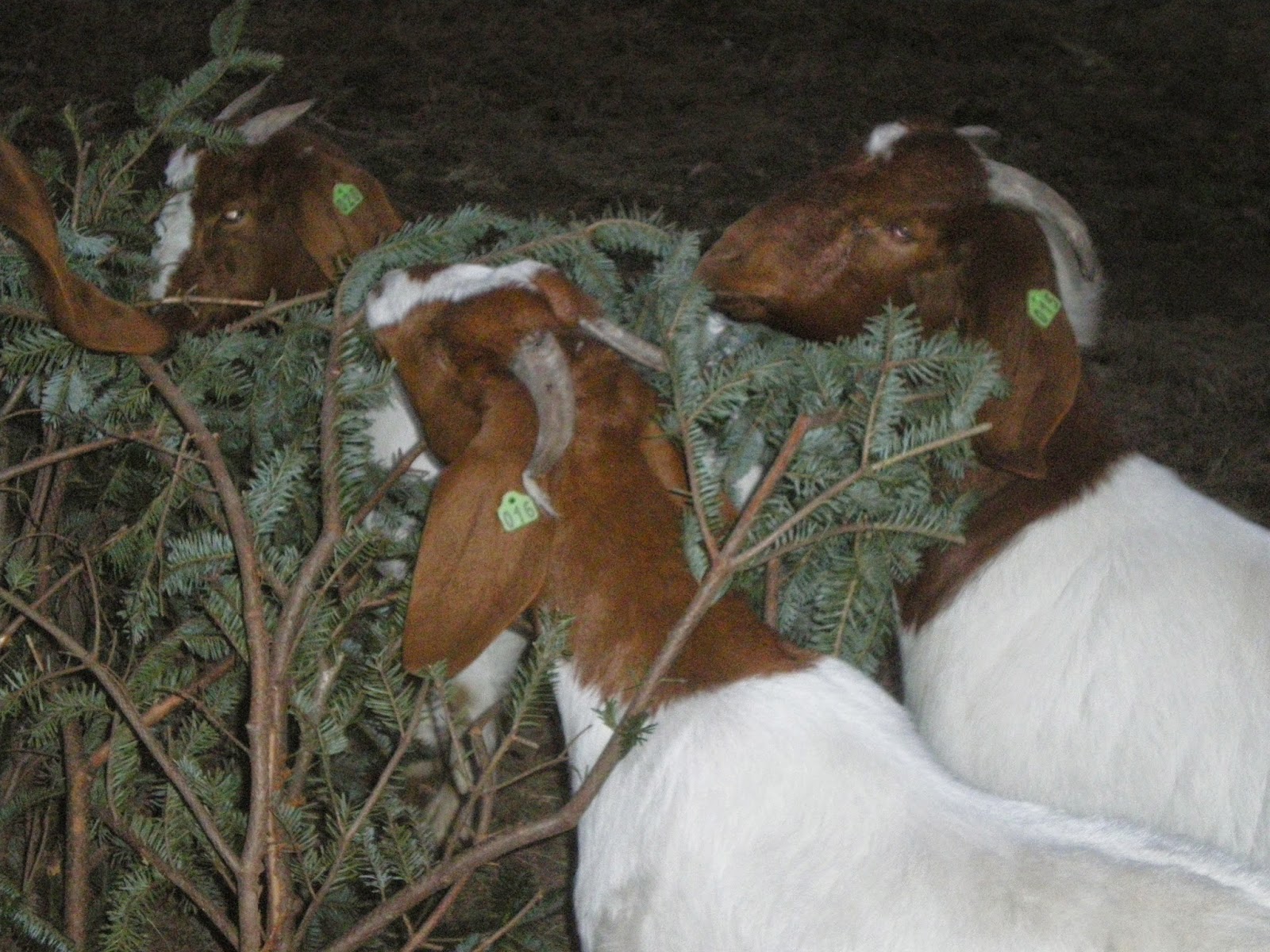 This appears to be their favorite Christmas song:

(with apologies, actual lyrics <here>)
Posted by My Happy Acres No comments:

Merry Christmas from My Happy Acres

Merry Christmas to all and wishing you a Happy and Healthy New Year! 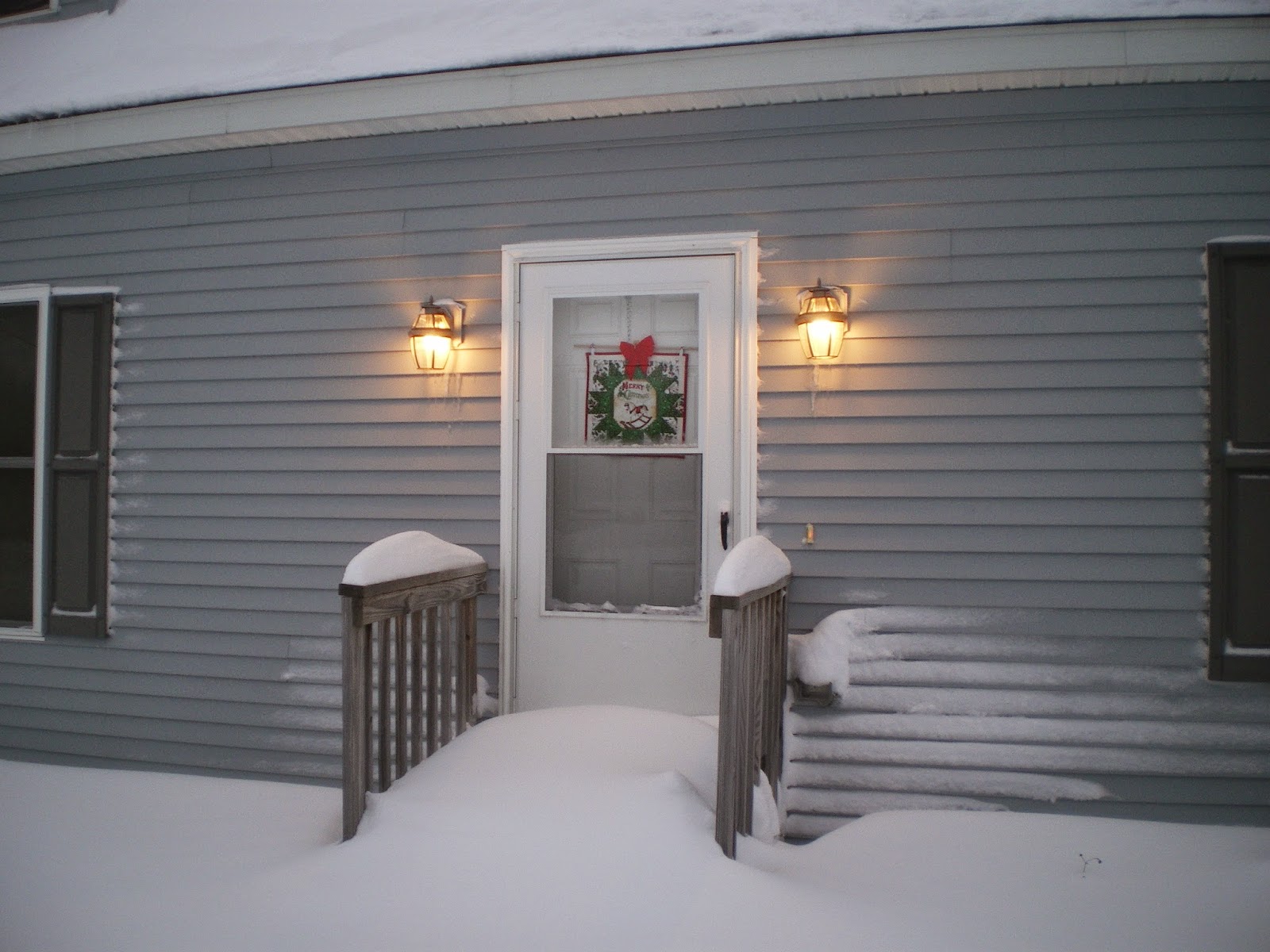 Email ThisBlogThis!Share to TwitterShare to FacebookShare to Pinterest
Labels: something nice

Goats in the snow 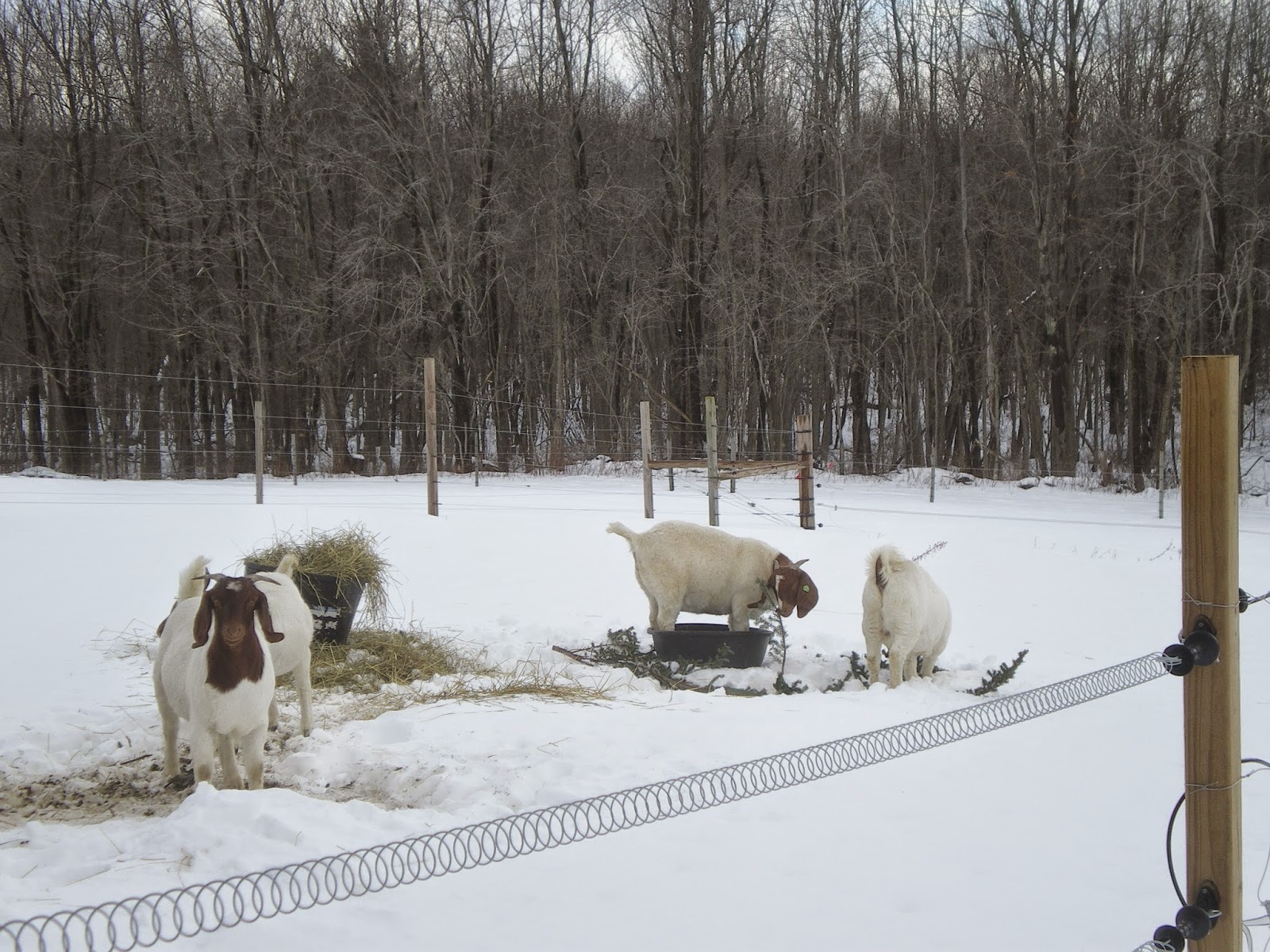 A few postings back I mentioned that the goat girls weren't all that thrilled with walking in the cold, wet snow.  Even though they've been in and out for several weeks now, they still step slowly through.  If you listen carefully, you can hear them muttering to themselves as they gingerly put one foot before the other.
Each day when I put their snacks outside, I've been placing the hay barrel and Christmas tree snacks a little farther away from the barn.  The girls begrudgingly follow me out, are delighted with their reward.  Still not happy with standing in the snow, they'll pull hay out of the barrel just to stand on it.  The best happened yesterday afternoon when Fluffy dumped out the Christmas tree snack tray so that she could stand inside the tray and continue to eat the snacks spilled out onto the snow.

The snow is beginning to melt and come off the buildings.  One has to be careful when working or walking beside one of these hazards.  A sudden avalanche can knock the wind out of you or worse.  When putting the girls outside during the day, we make a special effort to keep them away from the sides of the buildings.  A snow slide could easily kill one of them. 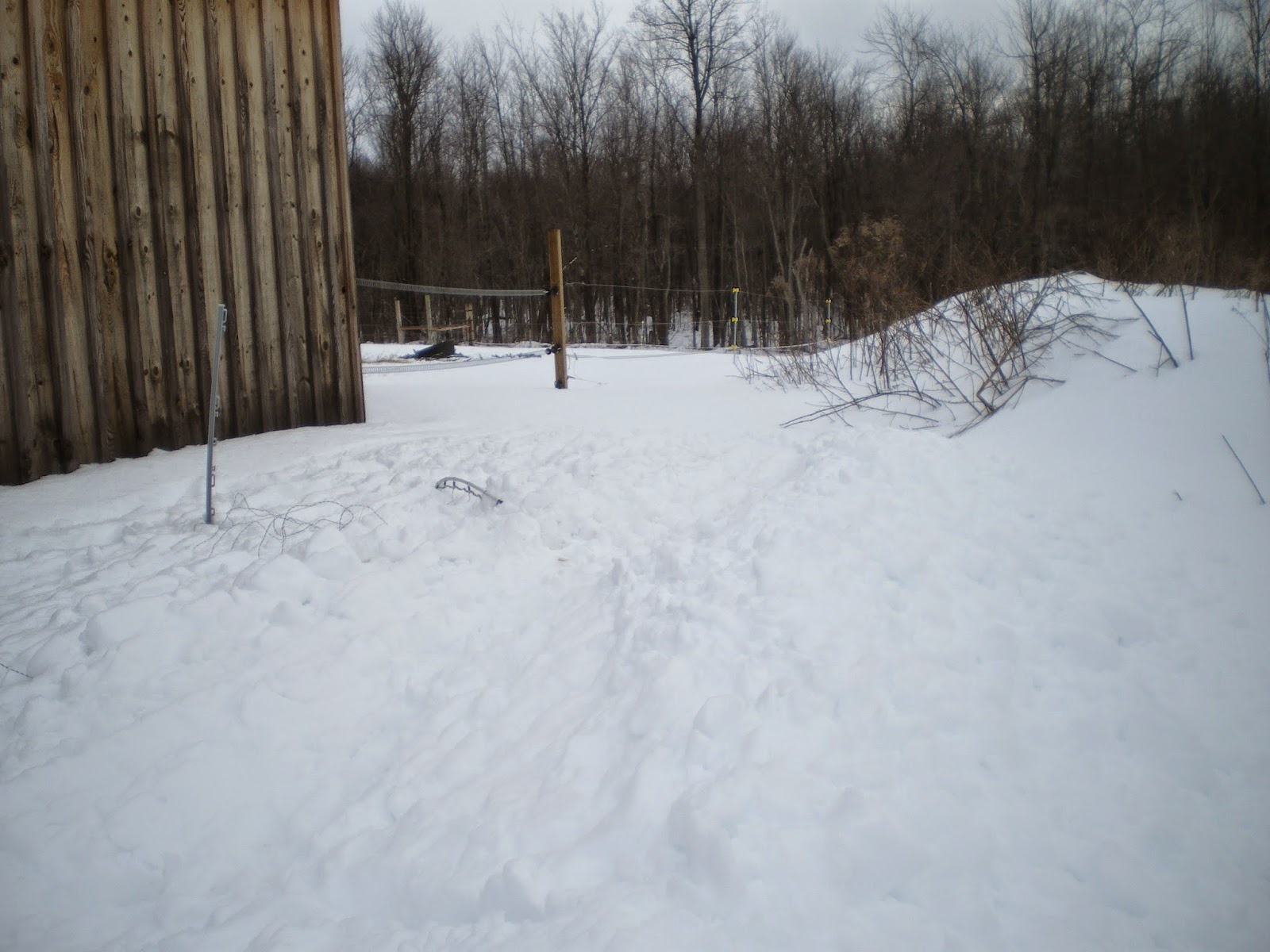 It's a little hard to see, but this wall of snow is what came off the roof Saturday afternoon.  Three feet deep, 30 feet long, and about 15 feet away from the side of the barn, the bulk of the snow came flying off to land out here with only a smaller amount landing closer.  Consider this: one square foot of wet snow can weigh as much as 21 lbs.  This single load weighs about a ton and a half.  No wonder buildings give way under their load!  (Read more here)  If you find yourself needing to clear away the snow, please be careful...and keep an eye out for what may be lurking above.


Remember when we looked forward to a snow day?  Since moving to My Happy Acres I decided to do my level best to remember those feelings and embrace them.  Whenever I wake up and find the world blanketed in a heavy layer of white, instead of dreading the work, I think about when I was little and helped shovel our driveway (which when you're little seems like it's nine miles long).  I would pretend to be building a giant snow fort or making a great wall or canyon.  I learned that if I cut the snow into blocks and stack them along the sides, I could grab them later for making snow men or forts.  Mom said that she thought what I was doing was a complete waste of effort but I had a plan.
This morning we woke up to at least 14" on the ground and some very interesting drifts to muddle through. 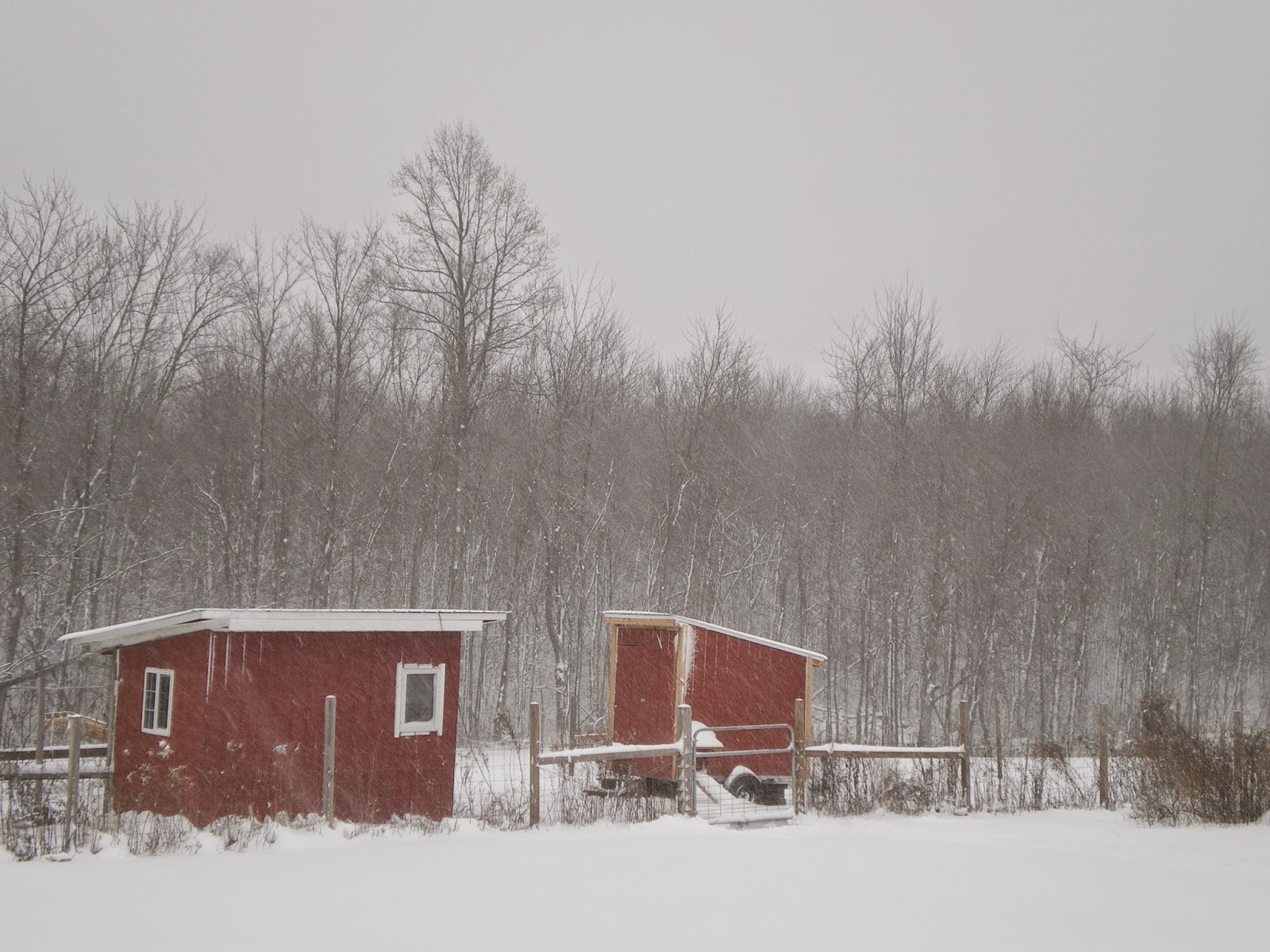 'hmmmm. Can’t get out the door without clearing away the snow.' started my outing with shovel in hand.  (I paused, looked up and smiled.  The sun was just peaking out making everything all glittery.  how pretty it was.) 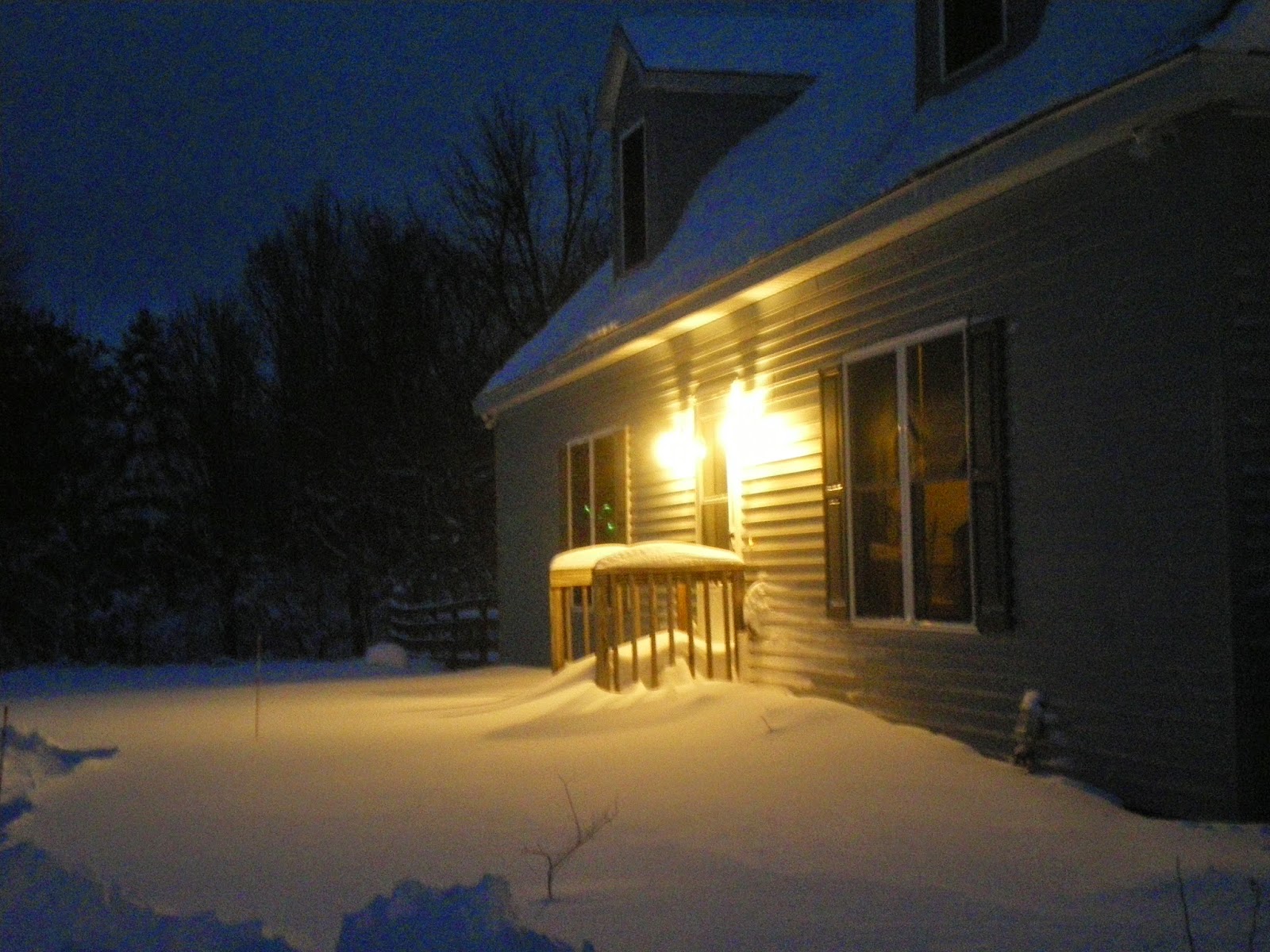 'hmmmm. Can’t get to the equipment barn without digging a path.'  (Did you know that the song, 'Low Bridge everybody down' makes a great shoveling song? )
'hmmmmm.  That’s a big drift against the barn door.'  (I opened the door and stepped inside to look back at the solid snow wall with the impression of the door on it.  You could see the layers of hard and soft snow, tiny flake and pelleted snow that came down last night.  Surprisingly the light twinkled through the lighter layers underneath the heavy wet blanket that lay on top.)

'hmmmm.  The snow is all the way up to the second rung of the steel gate.'  (Shovel in hand, I cleared away the drift amused by the little mouse trails that tubed their way along the length of the pipe.)
In the winter, instead of my trusty wagon, the dead sled or stag drag is used to tote stuff to and from the animal barn.  The snow shoes were pretty handy, making the trip to the animal gate a breeze rather than a trial.  Tromping along I thought about the writings of Jack London (a favorite author of mine when I was about 11 or 12).  I was a 49er making my way to the Yukon (although my trusty canine companion was still sacked out in his warm bed dreaming of bacon snacks).
The department of highways had done their usual fine job of keeping the road clear, although it did add an additional challenge by creating a high wall of snow to mount.
'hmmmm. More snow against the animal gate and barn.'  (Good thing I gave myself an extra hour to take care of everybody this morning.  Snow was steadily cleared away while I noticed where the rabbits and perhaps an owl had left their impressions in the pasture snow.)

The little goat girls were excited to get outside.  A small patch was cleared from their barn door to allow them to have a clear place to lie in the sun.  They bounced about before racing back and forth between their paddock and play yard. 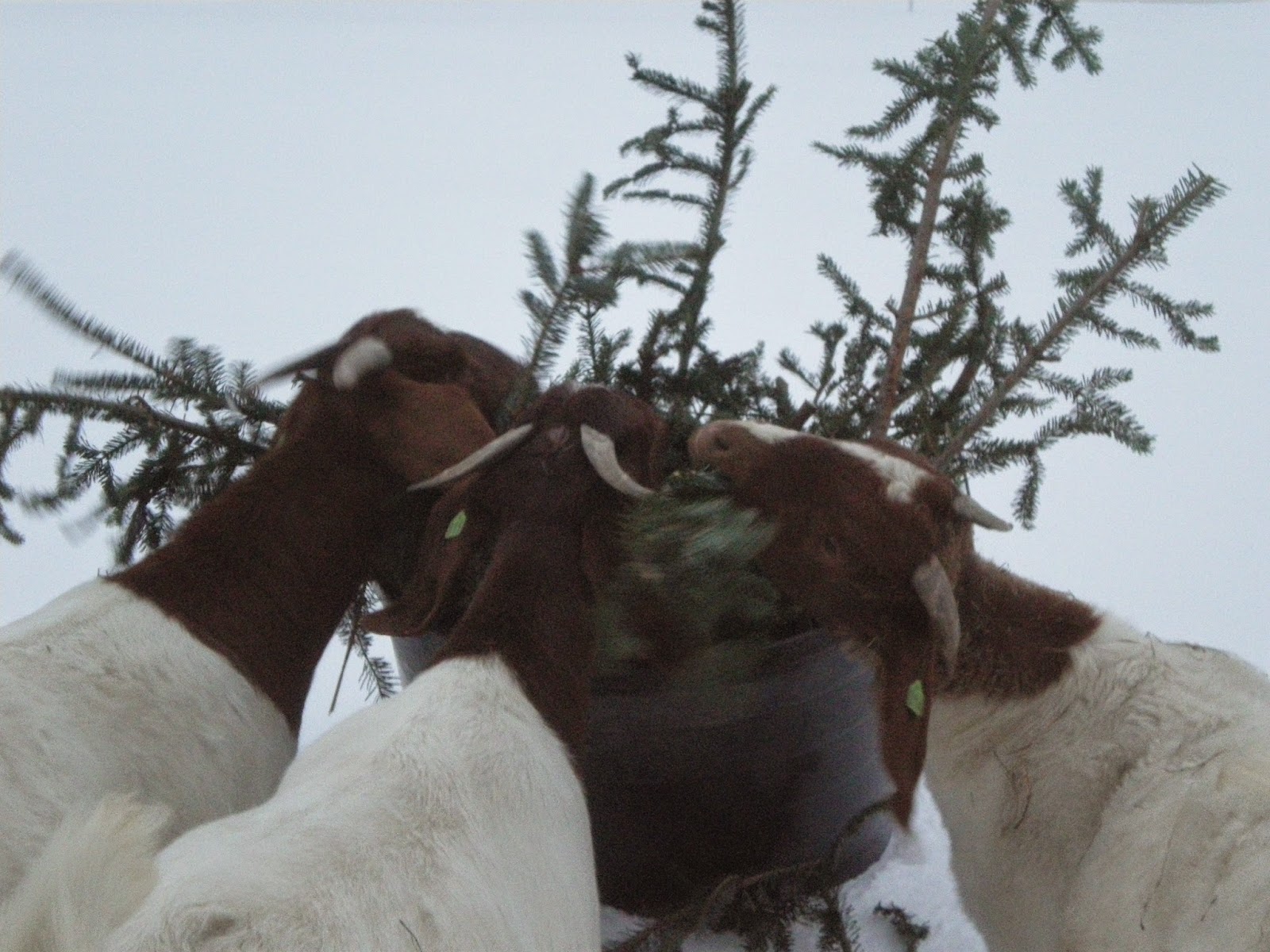 Sum total it took about two hours to do what usually takes about 45 minutes to do.  By thinking about sweet memories and how beautiful the world can be made otherwise difficult work a more pleasant task.

A light dusting of snow has started again.  So are the joys of winter.

Email ThisBlogThis!Share to TwitterShare to FacebookShare to Pinterest
Labels: something nice, Winter

Let's talk about the goats: we're very careful about what the girls get for treats.  There are so many things out there that may seem innocent enough, but can make a goat sick in a heartbeat.   Nuff said.  When we were offered wreath and tree trimmings, we were delighted.  After carefully inspecting for anything troublesome (none), choice morsels were selected, and brought out to the girls grazing in the pasture.
The babies had never seen or smelled these before.  Within five minutes of smelling then tossing boughs around, Jellybean decided that they were too tasty to just use for toys.  Yummy! 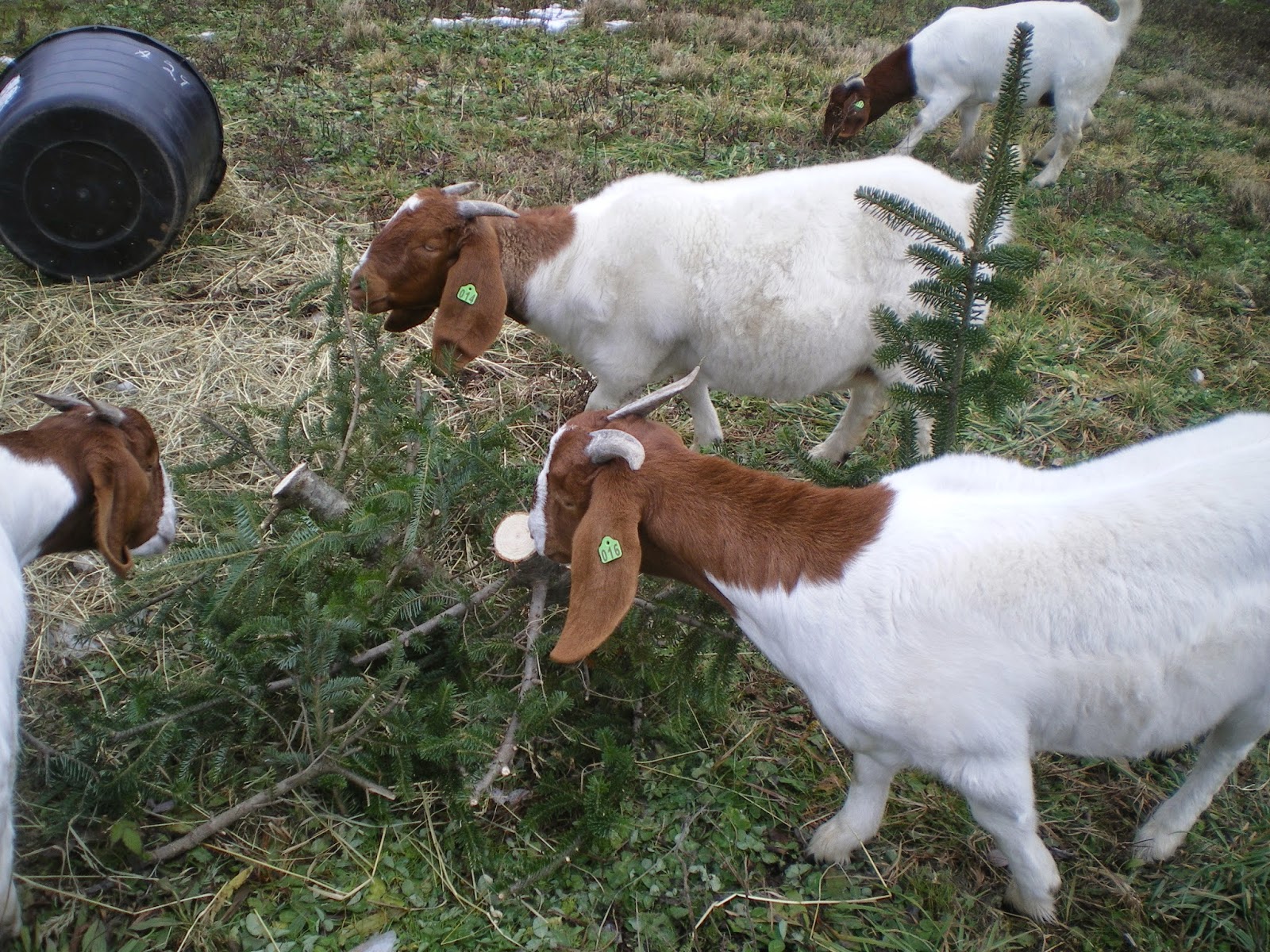 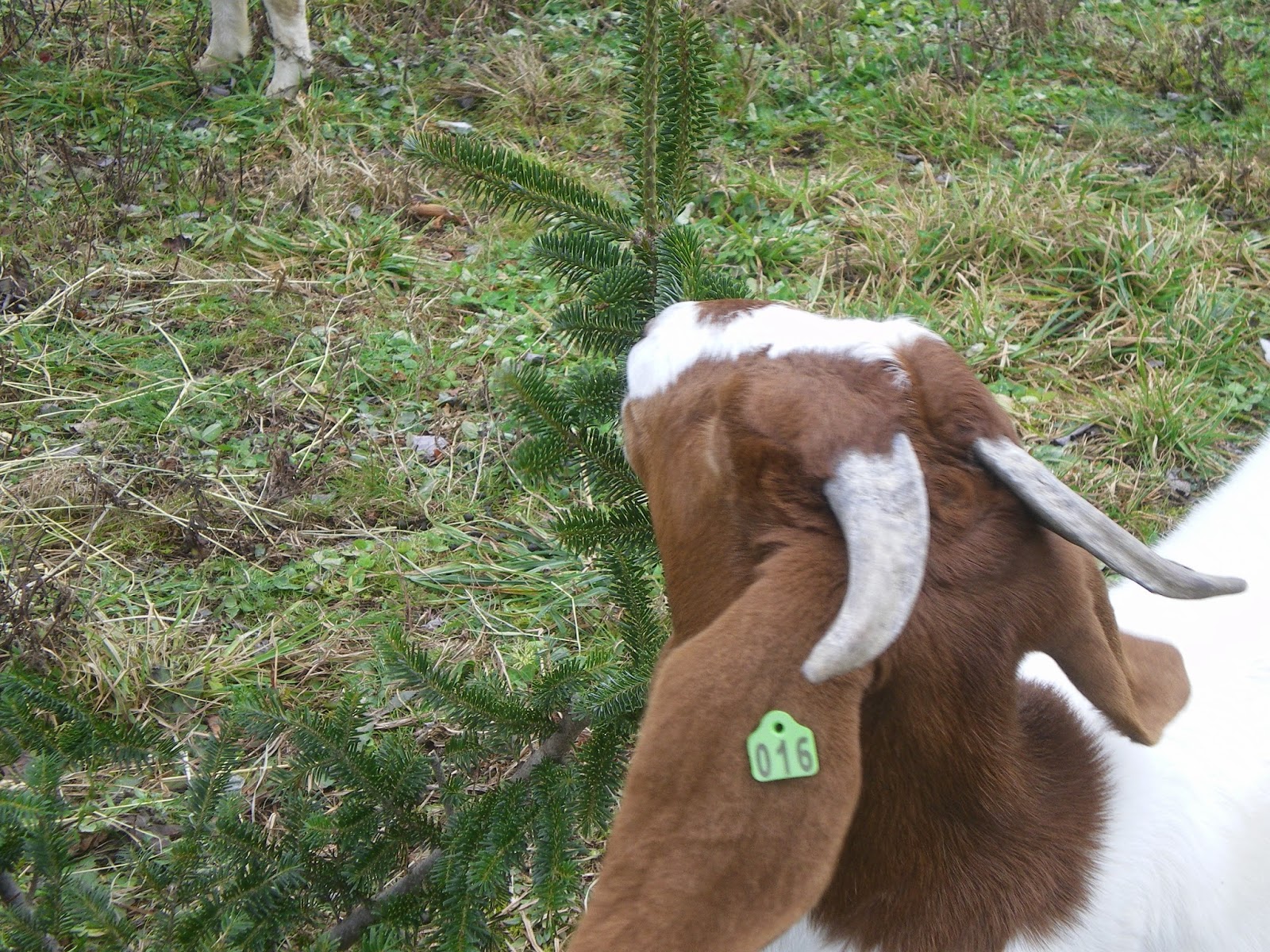 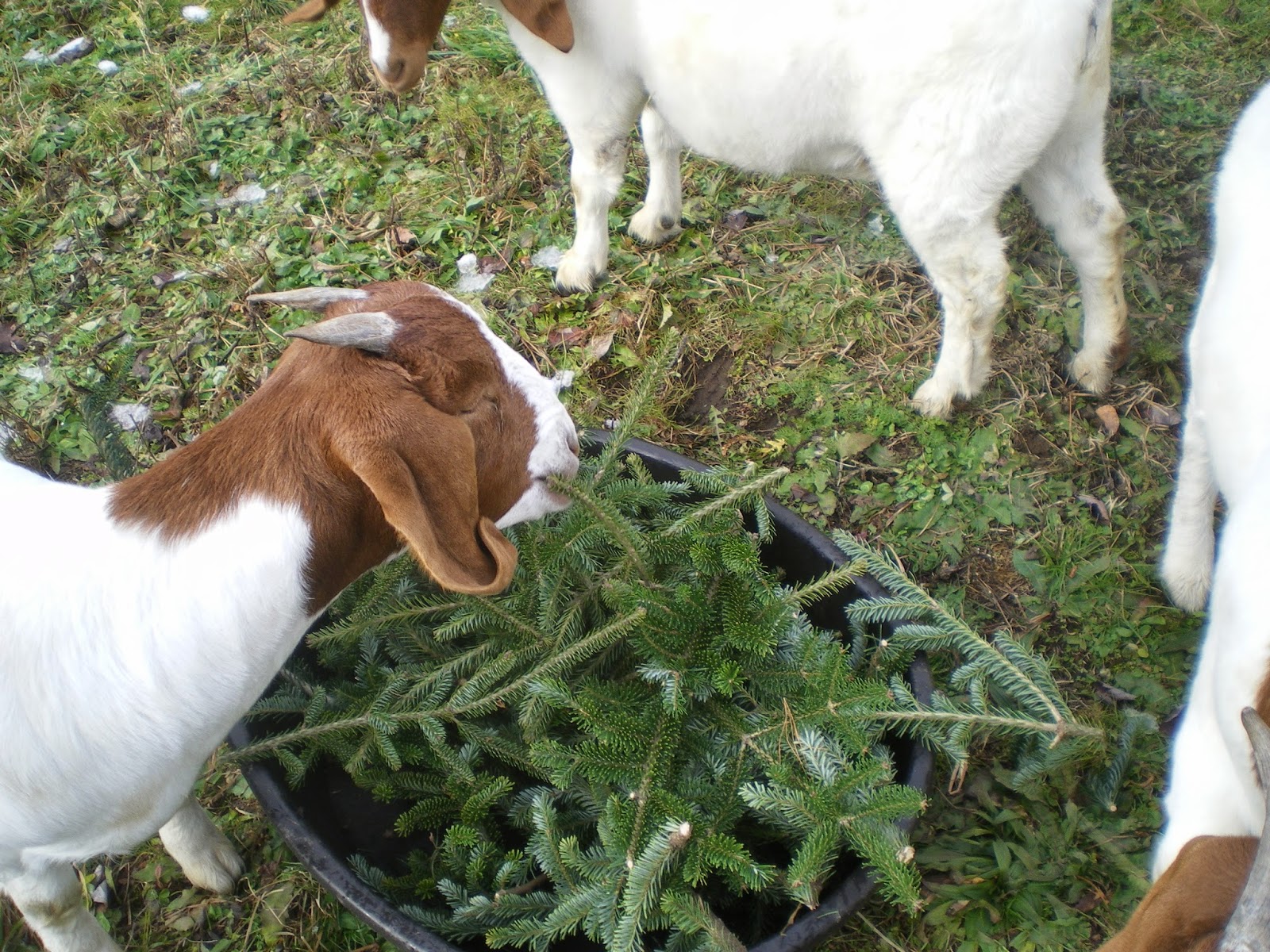 After a good roll in the cuttings, the girls now have a lovely pine fresh scent.  Could be worse I suppose.