How to make Happy kids

After providing a nice, safe place to live and grow, provide lots of good things to eat with plenty of fresh air and water.  After a good night's sleep, everyone is ready to go outside and play. 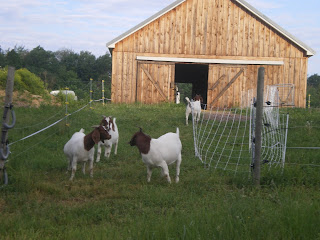 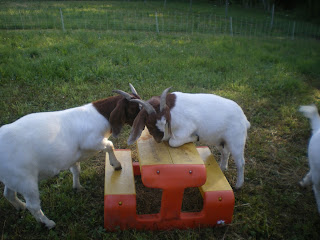 As is a reassuring scratch from Daddy. 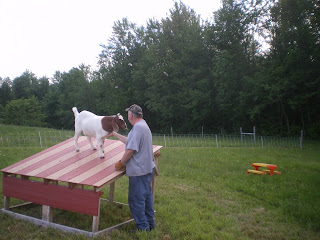 But sometimes, all a kid wants is to sit and tell Mom all about her day.  It's good to have someone just listen. 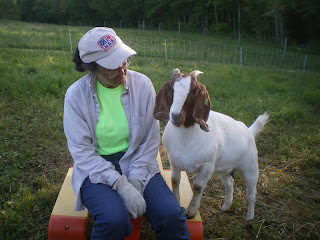 Posted by My Happy Acres 2 comments:

Email ThisBlogThis!Share to TwitterShare to FacebookShare to Pinterest
Labels: goats, something nice

How to Make Happy Puppy

How to make a happy dog: 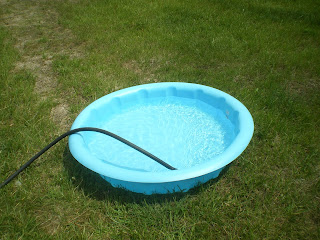 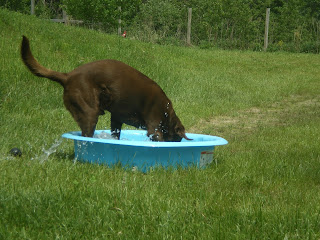 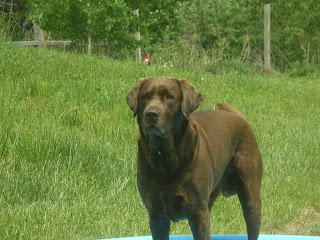 Allow to cool and dry.
Posted by My Happy Acres 1 comment:

Email ThisBlogThis!Share to TwitterShare to FacebookShare to Pinterest
Labels: something nice

Yep, it's that time of year again: time to resist all temptations to plant early.  Time to resist that desire to put just one tomato into the ground cause, well gee, it has after all been really lovely for a couple of weeks now.  Now is the time to get the ground ready and, yes, that means weeding.
To begin, I really don't like to use any kind of chemical cocktail in the garden when I can at all avoid it.  The very idea of Roundup and its companions gives me the willies.  So what to do when you have an area that has been taken over by grass and weeds?  Vinegar.  More specifically: one gallon of Vinegar mixed with two tablespoons of dish soap.  Lightly spray this mixture over the area to be cleared on a good hot sunny day, and in a few days, the area will be ready to clear of the dried up plant remains.
What's nice is it doesn't make the soil toxic, doesn't linger, and doesn't kill off the beneficial nematodes.  Because it doesn't linger, once the weeds are removed one must stay on top of any new weeds that may attempt to move in (sorry, no free rides).  If you're not careful, a dried up, overlooked root ball may spring back to life.  Be wary. 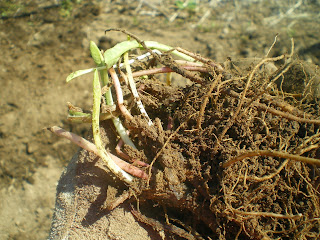 Plants need more than just a pot of dirt to grow in.  The soil needs to be dense enough to support the plant, yet loose enough to allow the roots to grow, drink, eat, and breathe.  By adding organic matter such as compost one loosens and enriches the soil with nutritious matter that also helps the soil hold moisture without becoming boggy.
One of the blessings of keeping chickens is maintaining a compost pile made from the bedding and chicken poop.  Chicken manure is very high in nitrogen and needs to sit for awhile before using it in the garden.  After about six months, a well maintained pile will be odor free and will provide beautiful, rich compost.
A little time and effort and soon you'll be rewarded.  For now, we wait for Memorial Day while happily digging in the dirt.

Been out walking in the orchard this morning.  Can't begin to tell you how nice it is to listen to birds chirping while strolling down the aisles of flowering fruit trees.  We had a touch of frost last night.  Not enough to knock the blossoms off, just enough to singe them (think freezer burn). 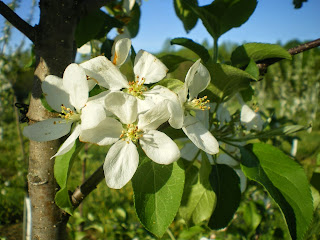 Because different varieties of apple tree have different picking times, one can walk the orchard and notice that some trees are just past peak bloom while others are just starting to open their flowers.   When enjoying such an abundance of flowers it's hard to resign ones self to the fact that one can't let ever blossom make an apple.  The tree will be healthier and the fruit will be larger and tastier if the tree is only focused on growing fewer apples.  How to decide?  ahh that's a decision for another day.  For now it's time to enjoy the lovely fragrance and the fragile delicate flowers. 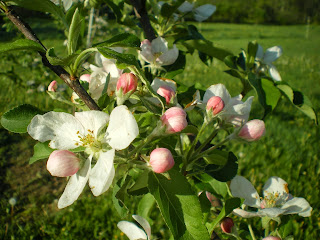 'I don'wanna get my feet trimmed! no!no!no!no!'
It was six in the morning, out in the goat barn.  The stanchion was in place and the girls were lined up to get their feet trimmed.  Goat hooves, like toe nails, grow continuously and need to be periodically trimmed.  Most of the time the girls are very good about it, going into the stanchion one-at-a-time, no issues, no complaints, easy peasie.  not this morning.
Fluffy was first.  She's my no-drama-mama.  Give her pats.  tell her she's a good girl.  a handful of sweet feed and we're good. 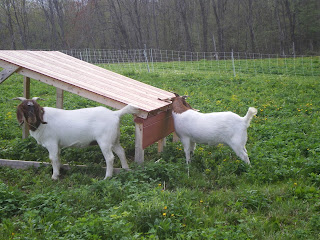 The twins wanted to come in together.  That's NOT going to happen.  The last thing you need is Ms BusyNose bugging her sister as she's getting her pedicure.  After a minor rodeo to separate them, Dorothy was up and ready.
Franny banged at the gate, 'I wanna come in!  I don't like this! I want my sister!'  Each time she bleated, Dorothy wanted to see what she was doing.   We would stop trimming to get her quieted down again, pick up the trimmers, snip-snip, and Franny would bleat again.  Repeat this dance four or five times per foot.
Next was Franny's turn.  Dorothy pranced out of the stall and Franny raced in, only to hear the gate close behind her.
'I don'wanna get my feet trimmed! no!no!no!no!' With a little wrestling, I managed to get her up into the stanchion.  A couple of handfuls of sweet feed and all was forgiven.  Dorothy watched quietly at the gate as her sister was positioned.  Franny stood in there like she had been glued to the floor.  I would start to pick up a foot and she would shift her weight onto that leg.  When I did manage to get it up, she would lean hard into me.  Trimming a foot is hard enough without an additional 130 lbs leaning into you.  Periodically she would decide that you've been working on that one long enough and she'd pull and shake and shake and pull to get that foot out of your grasp.
'Just because you've had enough doesn't mean we're done,' I said softly to her.  'We'll be done quicker if you'd just stand still.'   Dorothy murmured a soft, 'Mhhaaf.' and Franny quit jumping about.  A few minutes later Franny was ready to join her sister.
All the while the girls were getting their feet trimmed, Ms Jellybean wailed, 'Why do they get all the attention?  Wadda 'bout me?  When do I get to play?  When do I get sweet feed?'  Of course as soon as she was set up, she wanted down.  'Whatcha doing?  why are you poking at my feet?  I want more sweet feed!  where's Daddy?'  She danced around in the stanchion while I attempted to finish.
Finally after an hour and a half, everyone was done and set up with her breakfast.  Or so I thought.  As soon as I opened the gate, everyone rushed back in where the stanchion was set up. 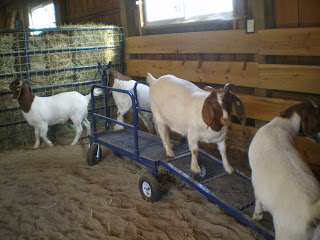 No amount of calling was going to get them outside.  I pushed.  They pushed back.  I called.  They just laughed (nah-nah-na-nah-nahhhh!).  I then remembered the magic word.
'Anyone who wants a cookie come with me!'
'Cookie??? did Mom say Cookie?'  All the girls were heads up and all came prancing.
Never a dull moment.
Posted by My Happy Acres No comments:

Something nice to smile about

"I'm really not a morning person," I overheard someone lament the other day, "I can't seem to get myself out of bed before 10am."
10am!? I thought.  I can't imagine staying in bed so long.  At dawn the deer and other animals are out grazing.  The beasties are all ready for breakfast, yet anxious to go outside to graze and play.  Early morning light seems softer than later in the day.  Temperatures are cool, so the bugs seem minimal. 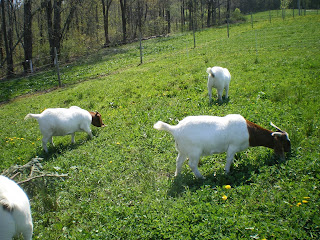 Out in the pasture, the girls are finding all sorts of tasties to enjoy.  The chickens are snacking on fresh grass and creepy crawlers.  The goats are delighted by the wide selection of things growing out there.  Some folks think that the only thing grazers eat is grass.  Each animal type, cows, horses, goats, even pigs, have different dietary needs, so the pasture needs to offer graze and browse to fill those needs.  A pasture suited for goats may be inappropriate for dairy cows, and visa versa.  Personally, I like the variety of ever changing flowers. 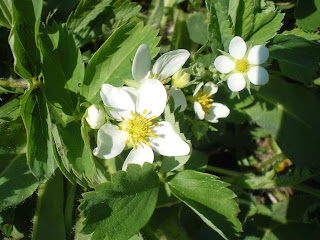 Many parts of the pasture are carpeted with wild strawberry blossoms.  If we get good rains, the resulting fruits are large, plentiful, and delicious.  If rain comes sparingly, the wild strawberries are small, dry, and very seedy.  You can guess what we prefer.
Meanwhile out in the orchard, the apple trees are all doing well.  While dormant, they were pruned and checked for issues such as insect egg sacks.  I'm pleased to say, that so far so good.  We have a bounty of pink tips promising lovely flowers later in the week. 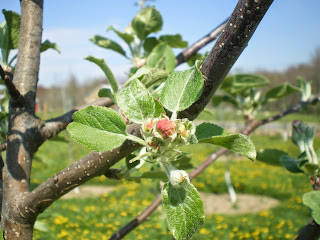 Did I mention that everything is a toy?  the girls got some new toys this morning. 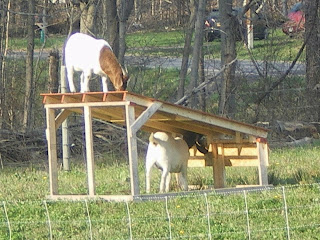 The little goat shelter we built last year, was moved so that the girls could play on it.  As heavy duty as it is, they still manage to move it around, even with someones sister standing on the roof. 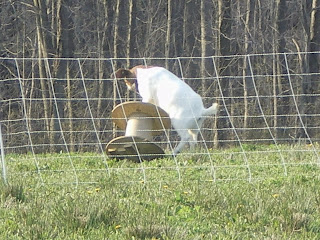 Of course, playing with the spool never gets old...

Spring has sprung...for the moment

The weather has warmed up rapidly.  Hard to believe that only a month ago the goats and chickens were bouncing around in the snow.
The girls have all been enjoying their time outdoors. As soon as breakfast is woofed down, they're busting out the back door and down the lane to their pasture.  We've been exploring different items to be used as toys.  Although based on our experience, nearly everything can be a toy. 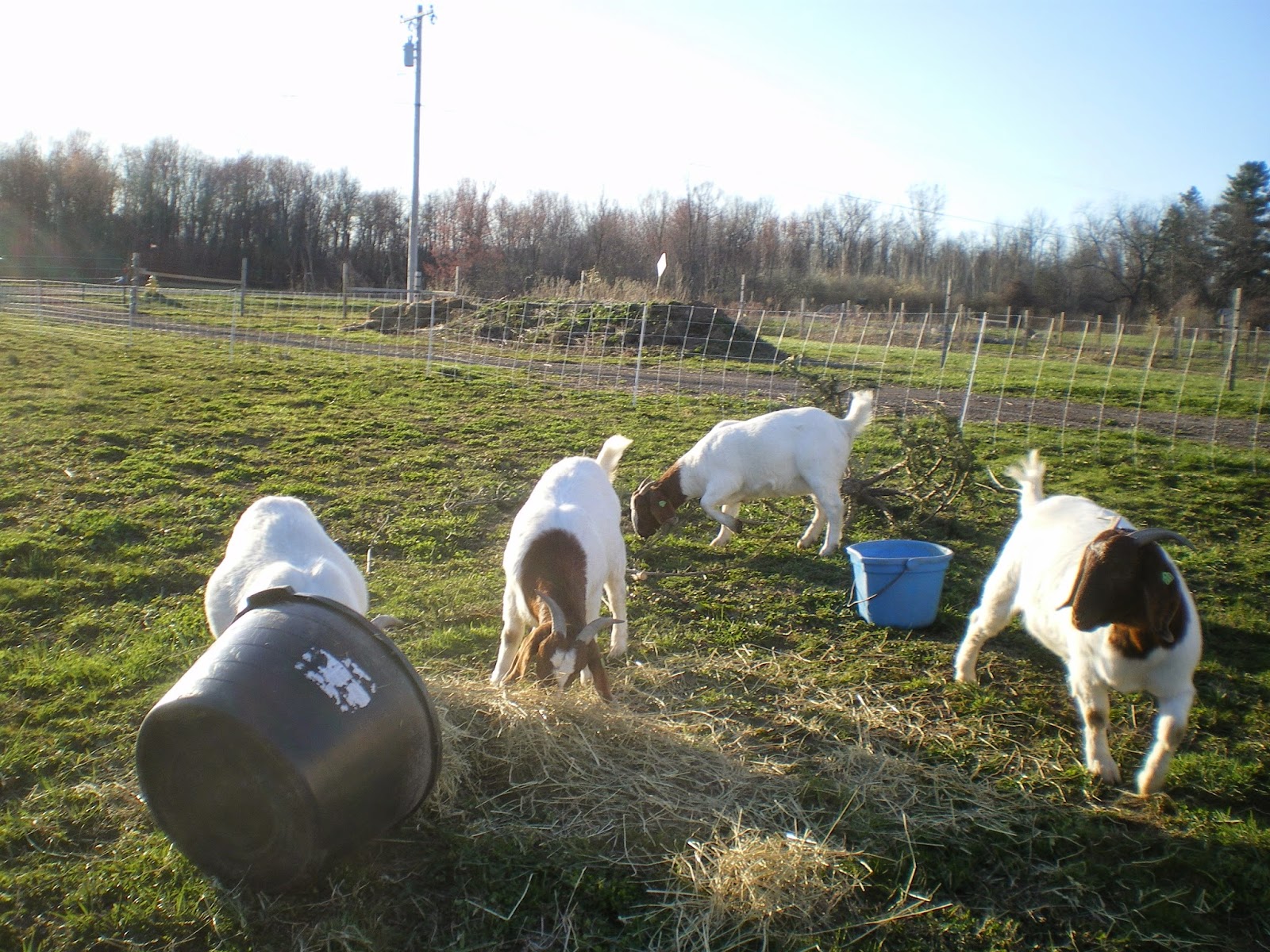 The tie down straps to the portable goat house, that took us the better part of an hour to winch down, took them all of ten minutes to pop off and proceed to toss about the paddock.  The bucket of hay to supplement their forage is tons of fun to dump out and, while your sisters roll around in the straw, boot and butt the bucket, while jumping on and off the up tuned bottom.  The old wooden spool that at one time held wire (sans wire, of course) is not only a good perch but also an excellent way to scratch one's belly while preventing your sisters from playing with it.
At the end of the day, the little goat girls all come in for their dinner.  After their good night cookie, curl up for happy goat dreams.  Dreaming of further adventures tomorrow.
Posted by My Happy Acres No comments: