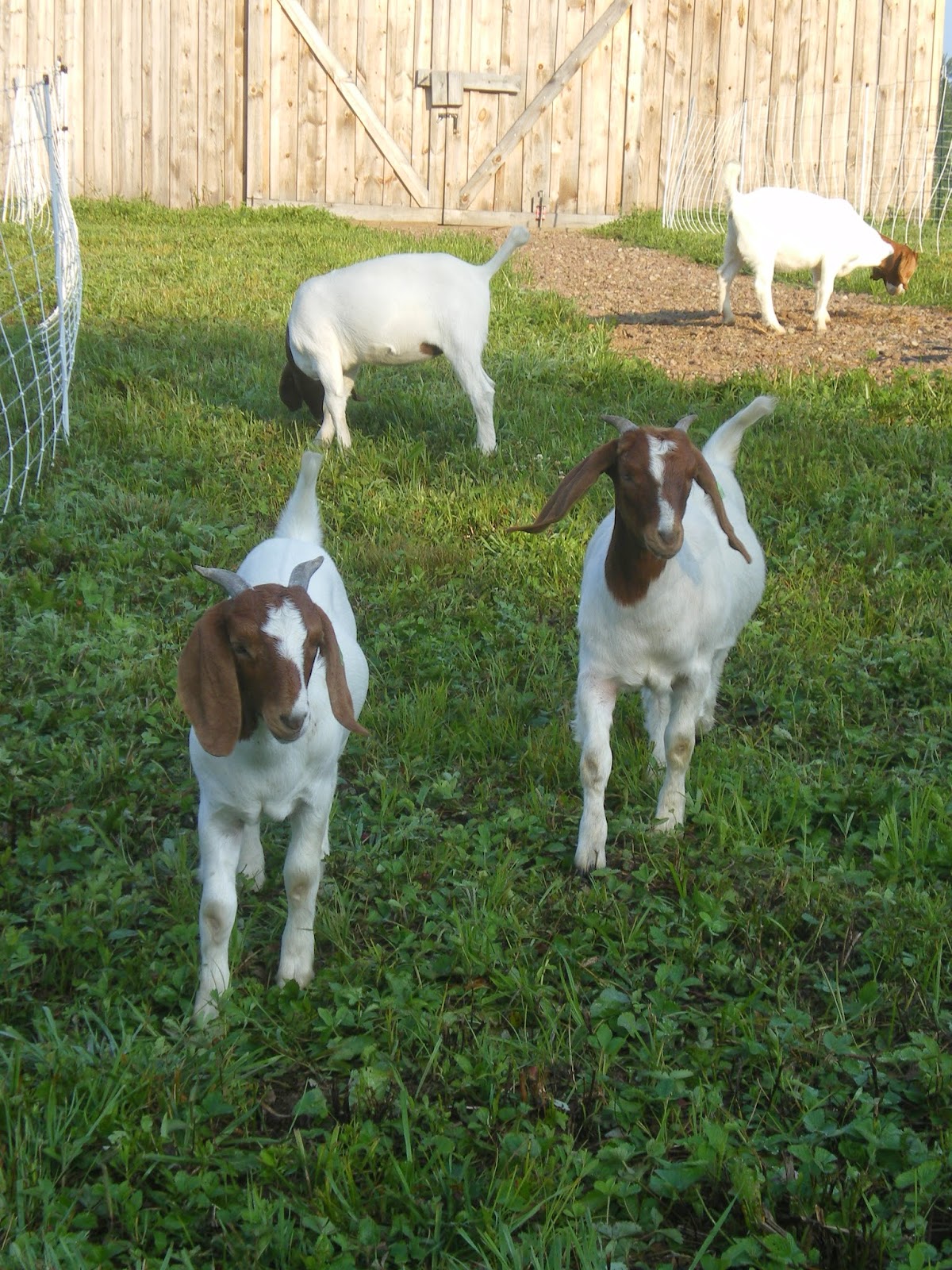 It rained most of the day yesterday, leaving the girls standing at the door of the barn singing, 'Rain, rain go away...', although I think some people would only hear, 'maaaaaaa! ma-maaaaaa!  ma-maaaaaa!'  This morning, just after breakfast, everyone came busting out of the barn, anxious to go outside to play.
After a few mouthfuls of fresh grass, they were bouncing around again.  Up and down on the turned over feed buckets, up and down on the pans & pales.  After a brief game of tag, it was up and down on the goat hut. 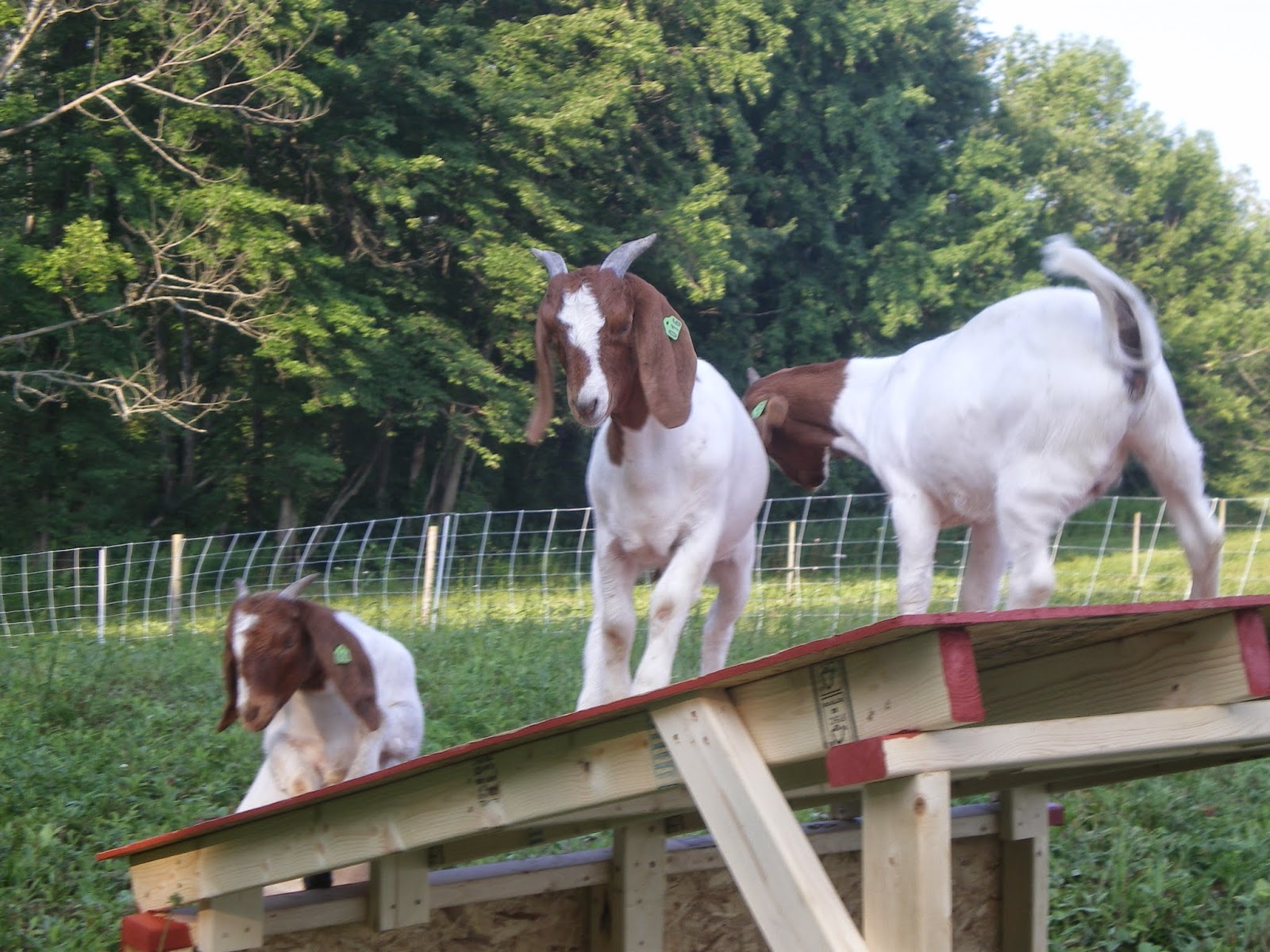 The temps are pleasant this morning.  A happy day for happy goats.

Up on the house top, the goat feet pause...

Wanted to share this: DH made a wonderful little shade shelter for the girls.  This morning, while configuring their new pasture, the shelter was hauled from the work barn to the field.  Just after breakfast, the girls headed out to investigate their new grazing area.  Within minutes, Jellybean was up on the roof (and jumping off), Fluffy was seeing if she could push it around by rubbing against it, and the twins were trying to decide who was going to be first to investigate this new thing.
I wonder how long it will be before they realize that the goat hut was put out there to give them a little shade during the day?  right now it seems to be just a great toy to climb on.

Email ThisBlogThis!Share to TwitterShare to FacebookShare to Pinterest
Labels: goats, something nice

Doelings.  That's what those little goat girls are called among the folks that raise goats for a living.  I call them better entertainment than anything found on TV. Let's introduce the girls:
Big Fluffy is exactly that: she's the oldest by about two weeks yet it amazes me how much bigger she is compared to the other girls.  She's never been shown so she sports a natural coat.  The hair is long and fluffy and feels akin to the hair on a Saint Bernard.  As the eldest, she's taken on the role of herd leader when I'm not around.
Dorothy and Franny are twins.  Both are friendly and like being in the middle of the action. They also were the first ones to figure out the secret of the magic pink bucket.  When you hear the sound of someone patting the bottom of the magic pink bucket, come running, and you'll get a treat of sweet feed.  More about sweet feed later.
The youngest and smallest, is little Jellybean.  What she lacks in size she makes up for in vocalizations.  One can be at the back of the orchard or down the road, if Jellybean is displeased about something, you'll hear her.  Jelly is also very sweet, ready for snuggles and scratches.
Every morning, before going outside to graze and play, the girls get a good breakfast of plain goat pellets and sweet feed.  Sweet feed is a mix of pellets, oats and other grains blended together with molasses.  It tastes a lot like sugar smacks.  I can understand why they vacuum it up whenever it's offered.
While the weather is cool and pleasant, the girls spend most of the day outside.  The pastures are rich and full of delicious goodies waiting for a hungry goat to come by.   To ensure that the pastures don't get over grazed, the girls are rotated to new pastures each week.  Their favorite toys, which seems to be anything they can climb and jump off of, are brought along. 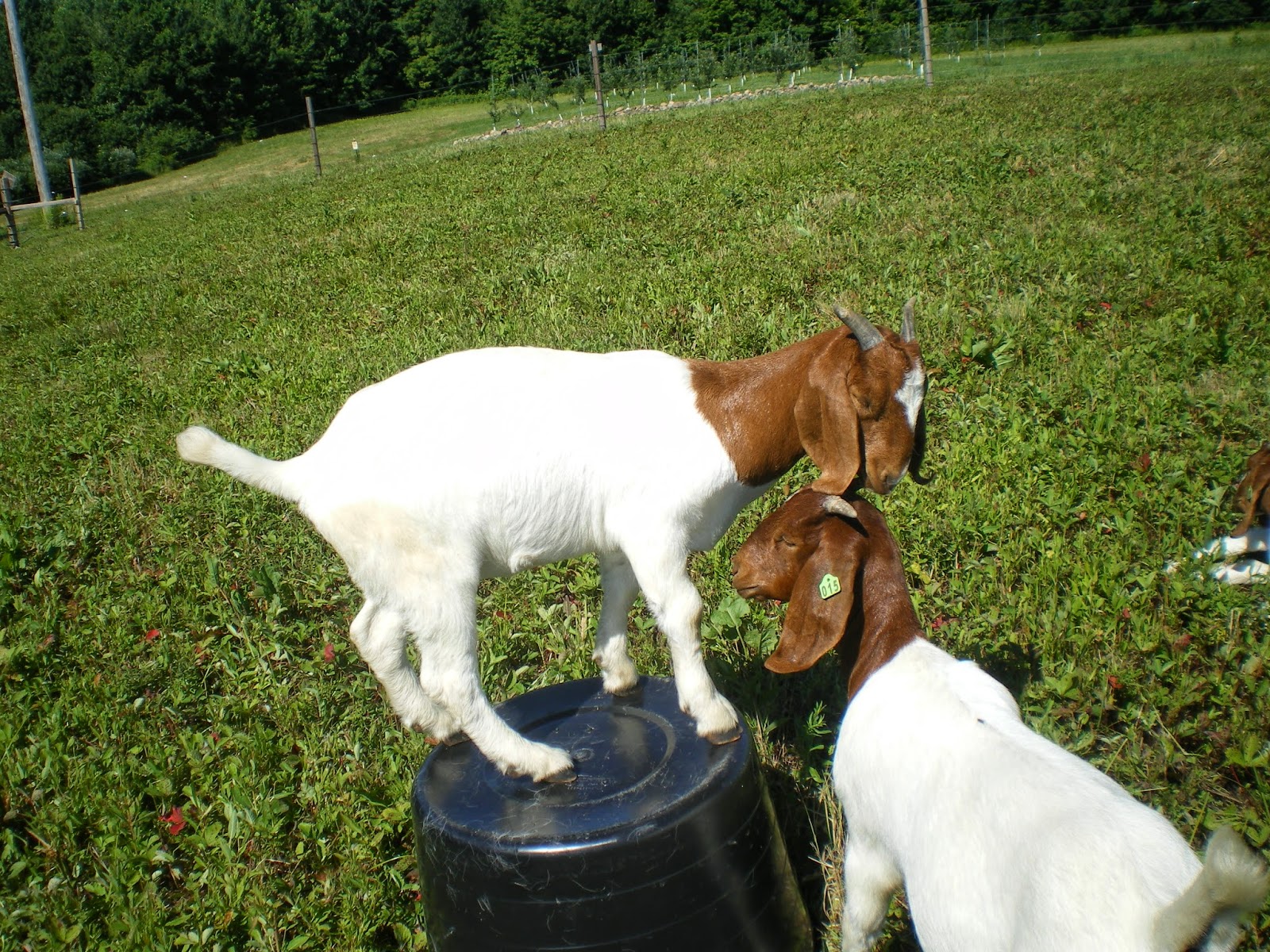 We're teaching them their words, like everyone else.  They've learned, 'Breakfast', 'Go to the barn', and, most importantly, 'Bed bye'.  At the end of the day, when everyone is heading off to their little hay beds, we wish them 'Bed bye' before giving them their final pats as a kiss good night.  Another big day at My Happy Acres.

Just a handful of kids

"Four?  Is that all?" said a woman I met at a local picnic when I told her about our new goats.  Let me tell you what I have learned so far: 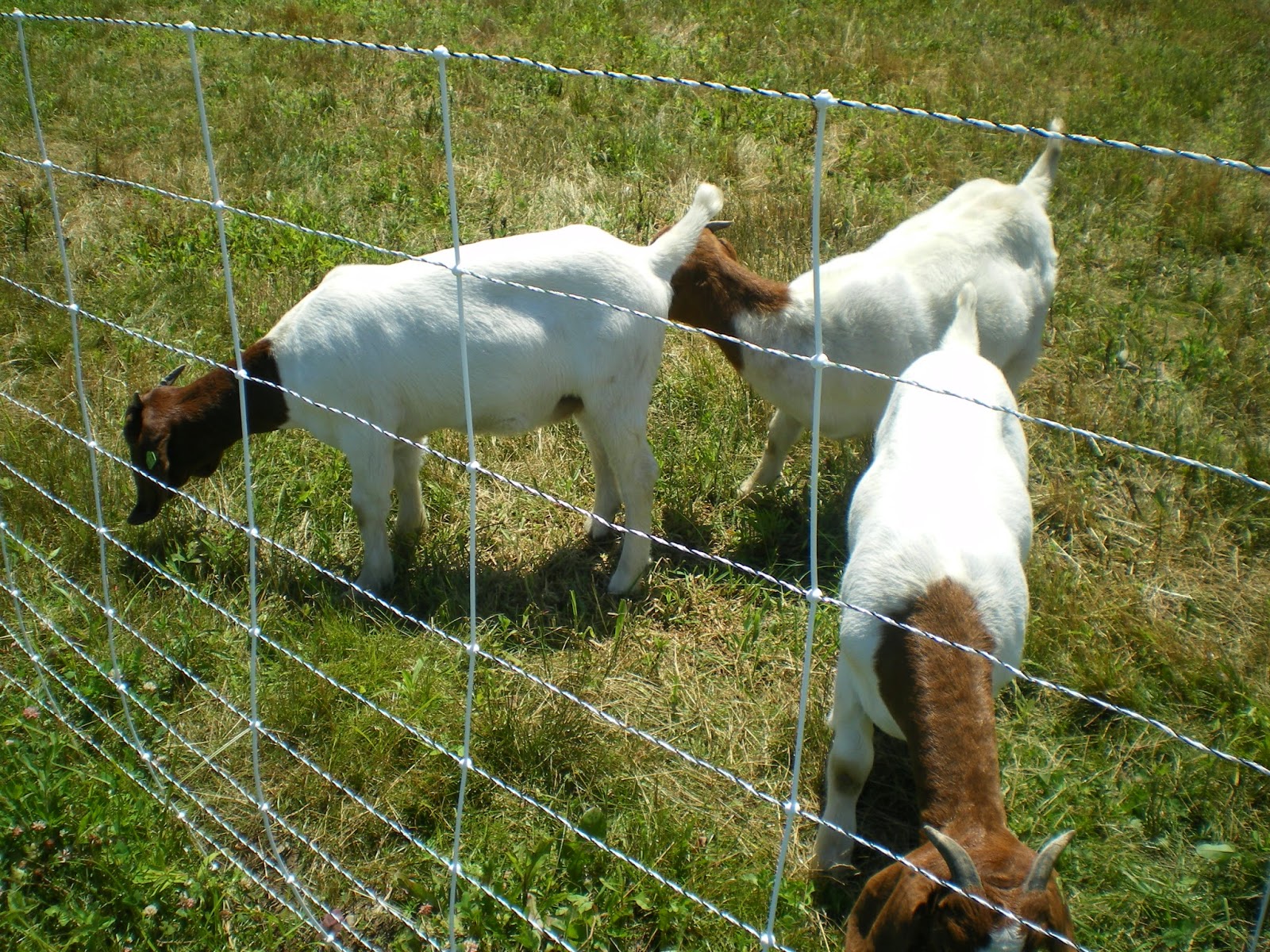 Goats are very busy.  They may be just kids, but if there is a way to get into, turn over, jump onto, or generally get into mischief, they will find it.  Jellybean, the youngest and smallest of the girls, has already shown me that she can easily get into spaces with as little as six inches to squeeze herself through.  There's nothing like suddenly finding a small sweet face looking up at you as you quietly sit working in what you thought was a secure place in the barn office.
During a recent thunderstorm, we had brought the girls into the barn to be safe.  I carefully secured areas that I didn't want the girls to get into but otherwise let them explore their surroundings.  After locking them in, I hotfooted over to Chickenland to check up on our other girls and chicks, before running on to the house amidst the downpour.   About 30 minutes later the severe rains had passed allowing me to head back to the goat barn to check on things.
I was surprised to find that the girls had broken into the storage stall and helped themselves to the hay bales I had placed there.  Apparently a freshly broken open bale of hay is much more tasty than the new bale placed in their feeder just an hour or two prior.  Fortunately their pellet feed is not kept in the goat barn, else I suspect, I would have a bunch of kids to upset tummies.
There is a myth that we are working hard to put an end to.  That myth states that goats will eat anything.  This is very untrue.  Goats are particular about what they eat and can very easily be harmed by ingesting things that they shouldn't.  Each morning before taking the girls out to their pasture, I walk around checking to see that nothing has blown in that may not be good for them.  Although horses and cattle prefer grass and alfalfa, goats like a coarser feed.  Some of their favorites include invasives such as multiflora rose and wild blackberries.  We're hoping that as the girls get a little older we can take them out to different parts of the farm to help clear out areas currently over grown with brambles and poison ivy (another favorite).
Meanwhile, every day is something new.  Every day brings new things to smile about.

The chicks have been growing like Topsy.  In as little as two months they have reached about half their adult size.  The weather has been mostly beautiful for them.  Warm pleasant days followed by mild evenings is just the ticket to grow happy chicks. 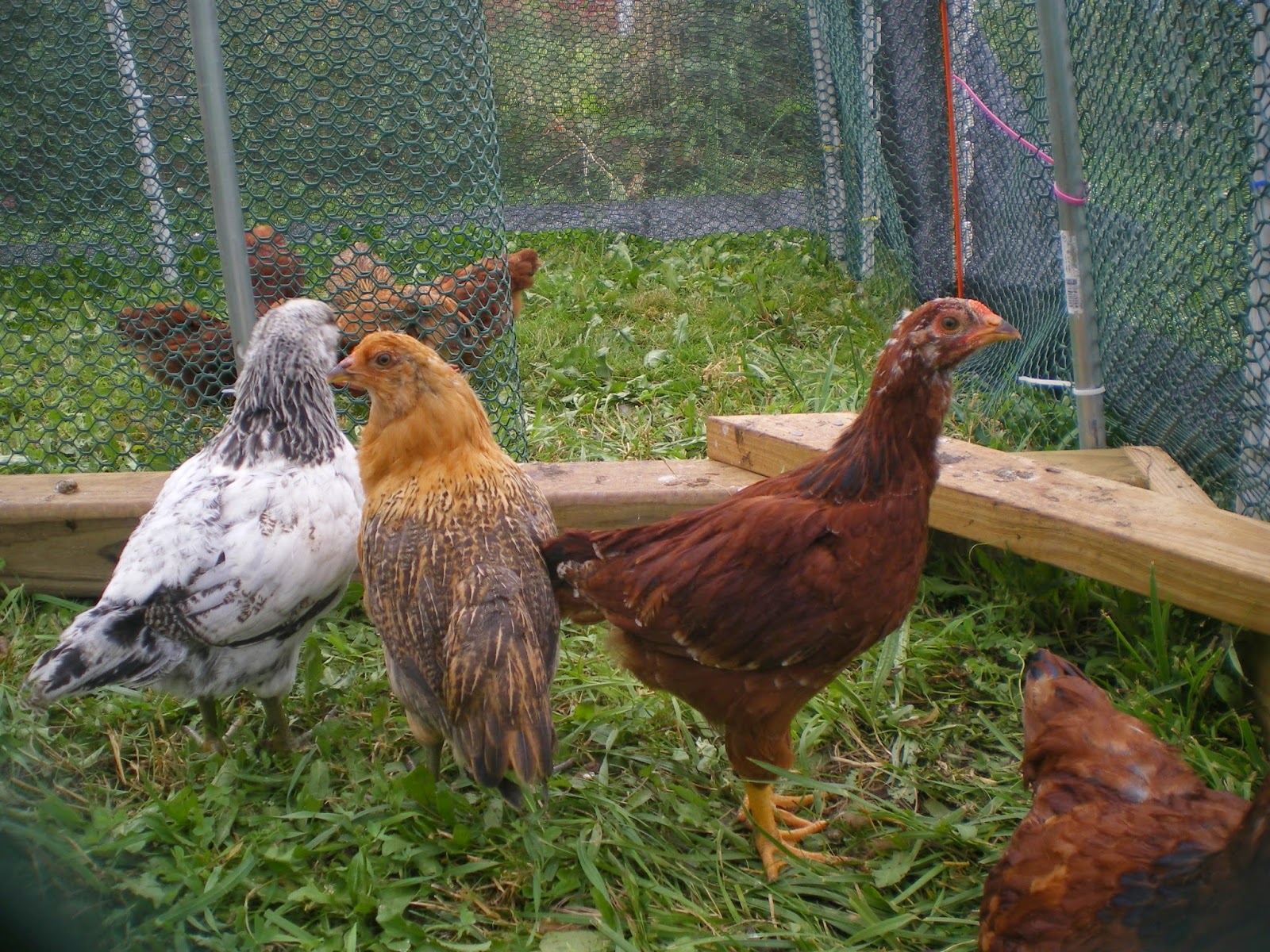 Because they've been growing so fast, we've been expanding the chick yard in a sometimes feeble attempt to keep up.  To further protect them from the harsh summer sun, we carefully draped shade cloth over their hoop and play yard.  A neighbor recently commented that with the chick tractor set up reminded her of when her children were little they would push chairs together and toss a blanket or sheet over them to play 'camp out'. 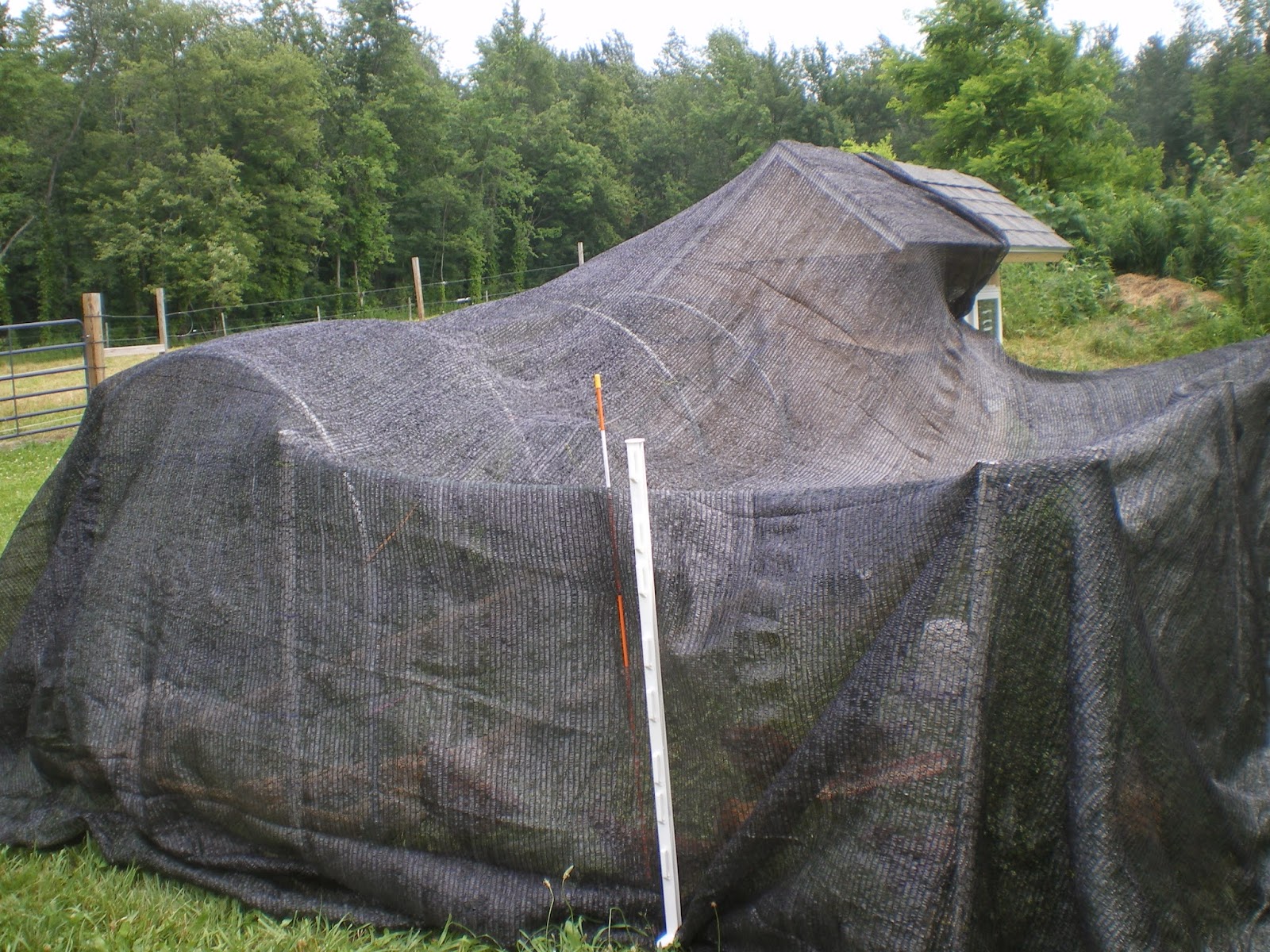 The little campers are wheeled to new locations around the farm about once a week.  This gives them fresh grass to nibble all the while protected from threats.
Still, when night comes, everyone goes bed-bye, roosting up safe in the tractor for the night, resting up for another big day tomorrow.