There is very little idle time on the farm.  When living in the city, I had little appreciation for the hours spent at the park watching the kids play or quietly reading in the shade.  I have no complaints.  I get up with the sun.  I am greeted by the happy smiling faces of my dog and goats.  Even the chickens want to snuggle up in my lap if I sit down for a moment near the coop.

Jellybean's bucklings have been growing fast.  This morning they each weighed in at more than 40 lbs!  All they want is to wiggle, get pats & scratches, and play! play! play!  Then, after a quick snack from mom, take a nap in the sun, then play some more.

Fluffy is due just after the Fourth of July.  I feel so sorry for her sometimes.  She's nearly 70" in circumference.  I'm sure she's carrying at least twins (which is not unusual for Boer goats) but it may be more.  I can only hope that she's as good a moma as Jellybean has been.
Fluffy is tired of being pregnant.  She's so big she can't reach all the itchy places.  She was trying to use scratch her back foot with her horn the other morning.  She wiggled this way and that way and stretched and contorted, grunting with each yoga position she attempted, never quite reaching that pesky foot.  Finally she laid down, periodically stretching that back leg to wiggle the foot.  Poor baby. 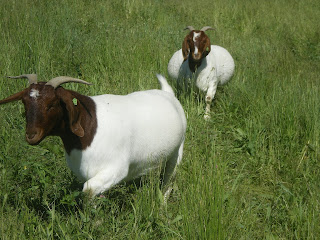 She might not be able to run as fast or as long as the other girls, but she still romps and plays tag.  Then lays down with the boys for naps.  I suspect she feels that July can't come quick enough.  Hoping for happy, health babies and easy births.

Email ThisBlogThis!Share to TwitterShare to FacebookShare to Pinterest
Labels: goats, something nice, spring