The hostages have been released, Fluffy babies! 2016

At five this morning, Ms Fluffy made a face at the camera then turned around to show that she was in labor.  Ah!  So we're not fooling this time!  A few hours later and she had three darling babies on the ground.  Two boys and a girl(!). 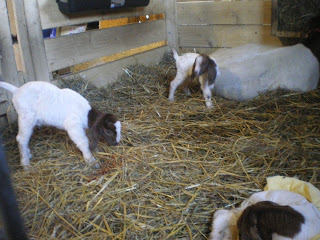 The first born was the girl (on far left).  She, of course, will stay on the farm and is to be named 'Precious'.  The second born, a boy, is a little eating machine.  Every time Fluffy stands up, he's first to the dinner table.  When she lays down, he gets as close as he can to her, periodically nosing her side (is it time for snacks yet?).  She softly tells him to knock it off while she rests.  The other boy, had a rough time getting born and is very tired.  He's had some snacks but I suspect he's going to need supplemental feeding (oh, boy. a bottle baby.).

Email ThisBlogThis!Share to TwitterShare to FacebookShare to Pinterest
Labels: goats, kids, something nice